Cyntoia Brown found herself standing near a Nashville street, sobbing from a beating she just received from her boyfriend/pimp when 43-year-old Johnny Allen pulled up to ask her, “Are you alright?” Seeking refuge, her story of fear, abuse, and addiction spilled out to the stranger. So he solicited her: “Are you up for some action?” The 16-year-old girl’s life took a dramatic change hours later.

She had been working as a prostitute to pay the bills and for a twenty-four-year-old boyfriend’s drug habit, smoking marijuana and snorting cocaine when life got too harsh. Cyntoia had hit the street at thirteen, a chronic runaway. “I wasn’t running from; I was running to,” she explains now. The streets of Nashville gave her “what I thought was freedom” versus what she felt was a cloistered life in Clarksville, where a Viet Nam veteran stepfather drank excessively and meted out punishment whenever. Her biological mother worked the streets prostituting to support a drug addiction. She and another teen runaway relied “on the kindness of strangers” who were aware of their runaway status, but did not care or used her youth to their own advantage. “I could pick up (marijuana) and smoke it whenever, I could stay out late or sleep, I was infatuated with older men who were twenty-five, twenty-six” she thought were boyfriends, but in reality were abusive pimps. She lived from seedy apartment to hotel room. The flotsam life had to end badly, and for Cyntoia Brown it did: in September 2006 she was sentenced to life in prison for killing Johnny Allen hours after he had picked her up. She will be eligible for parole when she is 67.

Today, Brown is a 25 year old, juxtaposing of street-wise youth and educated philosopher who is scoring high collegiate marks and enjoying work as a tutor, assisting inmates obtain their GED. “I’m always moving forward. I have the stigma of being an inmate,” Brown says. “But I try not to get caught up in the negative. I have to stay positive to survive.” She does not see incarcerated women following her lead. “It’s like they’ve given up. On everything, and everyone.” Outside prison, the legal jousting continues on her case: being tried as an adult, her history of mental illness and childhood abuse, the victim’s intentions, and a documentary made on her life. But inside, all she has is “to keep working to inspire people in here.”

Brown is philosophical on her life story. “Nothing bad affected me from my childhood,” she says. “I was thirteen and thought I knew it all. You don’t know half of what you think you know. You don’t think of the future consequences of your actions. But things (from childhood) stick with you. It affects your self esteem, yourself, how you view relationships.” Pimps, she says, “have a way of getting into your mind and you believe everything they say. They can mold you, shape you, break you until you’re like a puppy mill puppy, shirking and scared of everyone else.” She encourages young people to “listen to adults. They’re here for a reason. I missed getting a driver’s license, going to a prom. I wish I would have listened to people in my life that were positive.” Now that she is sentenced to life behind bars, her worries have changed: “If someone feels like something is wrong, do something about it. Write a letter. Speak out. Don’t just be outraged.”

Though it’s unclear why, specifically, Brown’s story came back into the spotlight, a text post describing Brown’s history and trial appeared to pick up serious steam when it was shared by singer Rihanna on Instagram.
“Imagine at the age of 16 being sex-trafficked by a pimp named “cut-throat.” After days of being repeatedly drugged and raped by different men you were purchased by a 43 year old child predator who took you to his home to use you for sex. You end up finding enough courage to fight back and shoot and kill him,” the post reads.
“Your (sic) arrested as (sic) result tried and convicted as an adult and sentenced to life in prison,” it continues. “This is the story of Cyntoia Brown. She will be eligible for parole when she is 69 years old.”
https://www.instagram.com/p/Bbwi26PjHf7/embed/captioned/?cr=1&v=7&wp=778#%7B%22ci%22%3A0%2C%22os%22%3A7114.995000000001%7D
“Something his horribly wrong when the system enables these rapists and the victim is thrown away for life,” Rihanna wrote in her Instagram caption.
The same post was later shared by Kim Kardashian, Cara Delevigne, and other celebrities, journalists and activists, who questioned why an underage girl involved in prostitution was given such a harsh sentence. 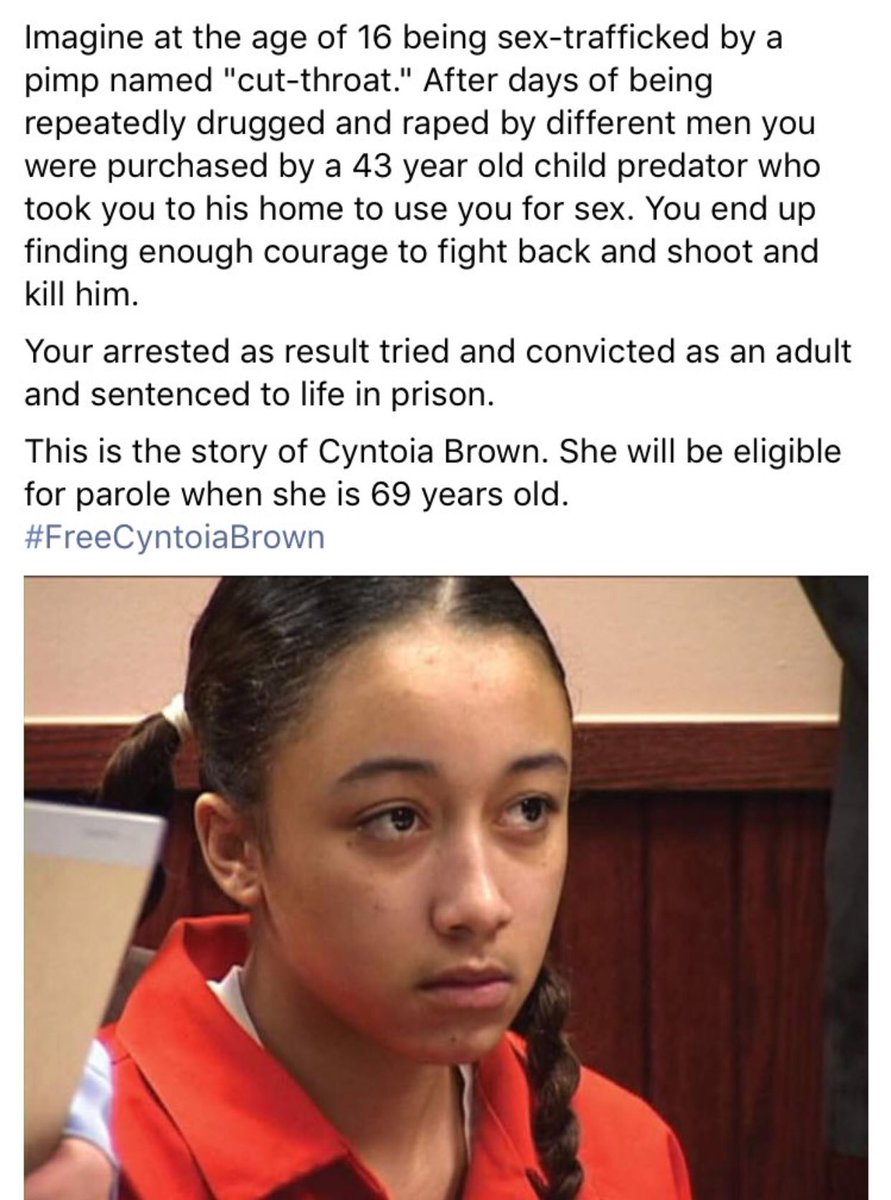 The system has failed. It’s heart breaking to see a young girl sex trafficked then when she has the courage to fight back is jailed for life! We have to do better & do what’s right. I’ve called my attorneys yesterday to see what can be done to fix this. #FreeCyntoiaBrown